STANLEY PARK: The Story of One of The World's Most Renowned Parks 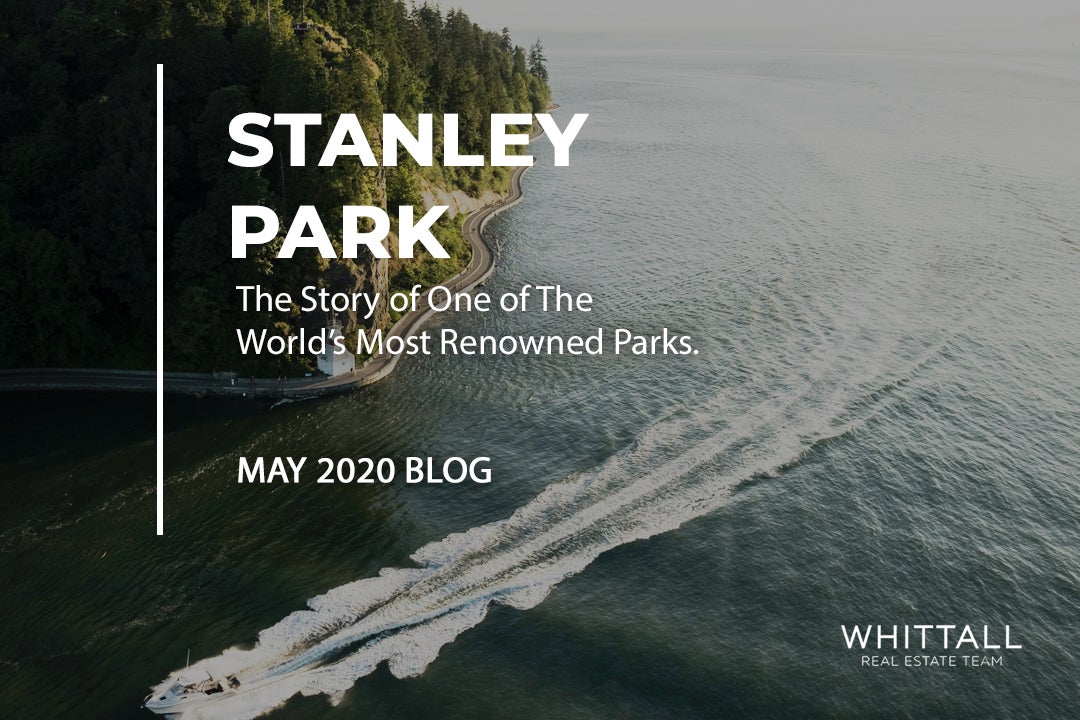 Amassing 405-hectares, Stanley Park is the centerpiece of Vancouver and Canada's West Coast. The park welcomes just over eight million visitors annually from across the world to take in its incredible greenery, rich history and wildlife. We are going to dive into what makes the non-man-made park such an attraction, its history and all the great things you can get up to when you visit!
History
Officially founded as “Stanley Park” in 1888, the 1,001-acre park served many purposes dating back to the early eighteenth century. Before Britain colonized British Columbia in 1858, indigenous people inhabited the land for thousands of years because of its abundance of natural resources. In 1886 two things happened; Vancouver became incorporated as a city, and the land was then turned into a park. At the time, it was named “Coal Peninsula,” where it was used as a military ground to fortify the entrance to Vancouver’s harbor. Later that year, city council successfully landed a lease of the park for one dollar per year. Then two years later, Frederick Arthur Stanley (Lord Stanley) - 16th Earl of Derby officially opened the park in his name in 1888. Between 1911 and 1937, man-made structures started to fill the densely forested green space along with other attractions including a polar bear exhibit, miniature train, and aquarium.

“A city that has been carved out of the forest should maintain somewhere within its boundaries evidence of what it once was, and so long as Stanley Park remains unspoiled that testimony to the giant trees which occupied the site of Vancouver in former days will remain.” – The News Herald, 1939

In 2014 TripAdvisor named Stanley Park as the top park in the entire world. With over half a million trees, a lagoon, lake, historical monuments, incredible wildlife, and a breathtaking seawall, it was really no surprise that the park received the honor.
The Hollow Tree
Many trees within Stanley are hundreds of years old, and many had to be replanted due to major windstorm damage over the years. One tree, in particular, the hollow tree, is a Western Cedar that is estimated to be 600-800 years old. The tree died but left a massive stump that is 60 feet high and completely hollow on the inside. It took major damage from the 2006 windstorm, and in an effort to preserve its historical stature, a metal frame holds the tree up safely. 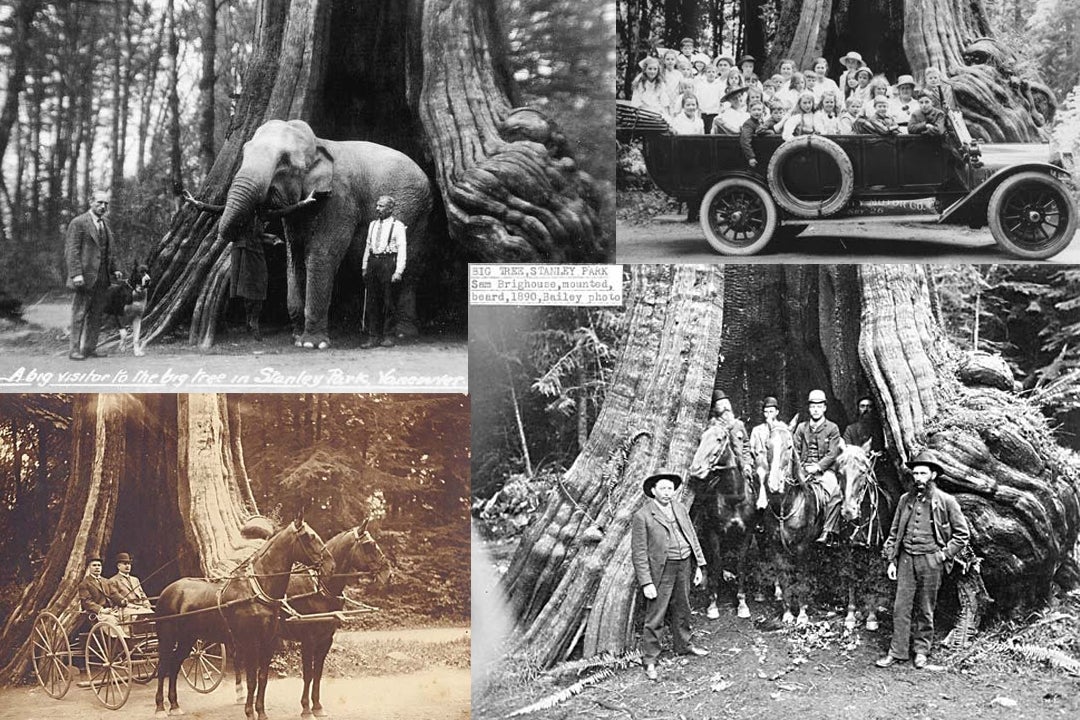 Natural Beauty
The park features three incredible gardens. The Rose Garden; established in 1920 and has over 3,500 rose bushes. The Shakespeare Garden; a garden that pays homage to the English Poet that features a monument and an arboretum with trees that were mentioned in his poems and plays. The Ted and Mary Greig Rhododendron Garden; a garden filled with hybrid rhododendron and azalea plants that were planted in the 1960s. Along with the beautiful gardens, the 132-year-old park has gorgeous cherry blossom and maple trees that can be noticed on your way into the park from Vancouver once they are in full bloom.
Attractions
Last but not least is, of course, the 8.8-kilometre sea wall that trails around the entire border of the park along the waters of the Burrard Inlet and English Bay. Along the wall, you will run into many historical attractions and lookouts, including First Nations totem poles, Brockton Point (famous for wedding proposals), Prospect Point, Siwash Rock, Third Beach and a statue in the water named “girl in a wetsuit” that was sculpted in 1972 to symbolize the popularization of scuba diving at the time. Stanley also has two yacht clubs, tea house restaurant, and prospect point restaurant, which we recommend when things open back up for great food and incredible views.
There’s Always Something to See and Do!
With COVID-19 shutting down the park for cars, there is now lots of room to grab your bike and go for a ride in Stanley, while keeping your distance still, of course. You can bring your own or rent them! Whether you are on a bike or on foot, there is more than 27 kilometers of forest trails inside the park. The trails are now patrolled by the Vancouver Police Department on horseback, where you can even embark on a guided tour of the stables where it teaches kids to approach a constable on a horse if they get lost.
Halloween
In October, the park puts on the Ghost Train in Stanley Park, which takes you through the park for spooky visuals, all in support of the Greater Vancouver Food Bank. Last year’s event was called Alice in Nightmareland, and the hope is to put on another event this year for a great cause.
Christmas
Stanley Park is such a great place to be with the family to enjoy the holidays. Each year the city puts on the Bright Nights Train, a train that guides you through the wonders of Christmas while all proceeds go to supporting the BC Professional Fire Fighter’s Burn Fund. Since 1998, $1.4 million has been raised to help burn survivors.
We hope you enjoyed the tour of Stanley Park and all its beauty. Our family will definitely be exploring as the province starts to fully open up. As always, we are here to help you with anything real estate. The market is starting to heat up as those who were pausing are now making a “move.” If you or anyone you know is looking to Buy or Sell, contact us!
We hope you are staying safe and healthy.
Keep up-to-date with us on Instagram, Facebook, Twitter, and YouTube!
Kim: (604) 720-3659 | Sean: (604) 880-9400 | WhittallRealEstate@gmail.com
.
.
.
.
.
Citations
http://stanleyparkvan.com/stanley-park-van-tree-hollow.html
https://en.wikipedia.org/wiki/Stanley_Park#Attractions
https://bc.ctvnews.ca/stanley-park-named-world-s-best-park-by-travel-website-1.1874631
https://sites.google.com/site/historyofstanleyparkhollowtree/gallery/
https://vancouver.ca/parks-recreation-culture/gardens-in-stanley-park.aspxhttps://vancouver.ca/parks-recreation-culture/ghost-train.aspxhttps://vancouver.ca/parks-recreation-culture/bright-nights-train.aspx
http://www.vangabonds.com/stanley-park-at-a-glance/